Vascular surgery is the treatment of surgery on diagnosed patients with diseases of the arterial, venous, and lymphatic systems (excluding the intracranial and coronary arteries). 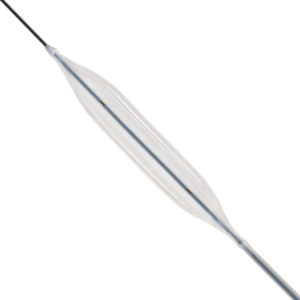 The AltoSa-Premier maximum high pressure PTA catheter is based on a over the wire coaxial shaft and is 0.035“ guide wire compatible and is 75cm in length.
The highly resistant nylon balloon is mounted on the distal end oft he shaft and can resist and reopen even strongest calcifications and fibrous lesions.
The proximal end hosts the hub for inflation and deflation of the distal balloon and the guidewire lumen. The balloon is diameter specific and length is 4 cm and should be chosen by the physician according to the patient’s needs.
Ideal for venous high-pressure dilatation.

Is there a role for geko™ Electro-Stimulation Device for reducing the risk of Venous Thromboembolism (VTE) in obstetrics?

Results
23 women were recruited over 6 months (Dec 2016 – May 2017). We found 65% (15/23) postnatal women needed the device as their only method of thrombo-prophylaxis. Of these women, 87% (13/15) had postpartum hemorrhage and 13% (2/15) had low platelets for which Dalteparin was contraindicated. Quarter (6/23) of the women with severe pre-eclampsia benefitted from the device antenatally during their admission as they were at risk of needing urgent delivery. Eight percent (2/23) women who had antenatal Daletparin used gekoTM during labor. Only two women did not tolerate the device and subsequently discontinued. 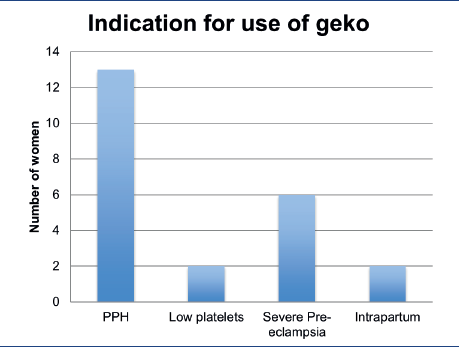 Conclusions
• The device studied was safe and well-tolerated.
• The device is potentially useful as a method of thrombo-prophylaxis in high- risk patients where other pharmacological methods are contraindicated or impractical.
• Also, compared to pneumatic sleeves, gekoTM allowed patient mobilization thereby reducing their risk.
• Further studies with a larger sample size will assist in the development of a clear protocol on the indications for use of gekoTM in obstetrics.

Electrical calf stimulation has been used in the past (ECS) as a method for preventing DVT. However, stimuli used in these studies were painful and could only be used when the patient was anesthetized. Modern methods of neuromuscular electrostimulation (NMES) produce painless stimuli. NMES of the lower limb muscles has been shown on duplex to be effective in improving blood flow in both the femoral and popliteal veins1,2. Stimulating muscle contraction through NMES has also been linked to a sustained enhancement of systemic fibrinolysis3. However, we are not aware of studies looking at the changes in the deep calf veins where early thrombi are often thought to start. One such study that highlighted this was performed by Labropoulos and co-workers. They demonstrated that isolated calf DVT was detected in 282 limbs of 251 patients examined. The peroneal veins were most frequently involved with 115 limbs (41%) affected. Posterior tibial and gastrocnemius involvement accounted for 37% and 29% respectively4.

AIMS:
This study aimed to determine the effect of the geko™ device on the velocities and volume flows in the peroneal, posterior tibial (PTV) and gastrocnemius veins in healthy volunteers. In addition to assessing the safety of the device.

METHODS:
The geko™ a CE Marked device (FirstKind Ltd, High Wycombe, United Kingdom) is a small disposable, internally powered, neuromuscular electro-stimulation device that is self-adhesive and applied to the outer/posterior aspect of the knee. This positioning enables integral electrodes to apply a stimulus to the common peroneal nerve, a branch of the sciatic nerve. This nerve controls a complex of muscles in the lower leg which activates the calf and foot venous pumps. Stimulation of these nerves by the geko™, causes the muscles to contract isometrically and will not affect normal movement of the limb nor mobility of the subject. Contraction of the lower leg muscles will boost blood flow from the lower limbs back to the heart thus increasing venous return, local blood circulation and help prevent venous thrombosis. The geko™ device has seven stimulation levels to balance the maximal effect of stimulation with subject comfort. Made from soft molding thermoplastic elastomer (TPE) overlaid onto a polypropylene case which houses the electronics the geko™ device is mounted on a hydrogel layer to adhere to the skin.

PARTICIPANTS AND PROCEDURES:
Eighteen normal volunteers (9 females, 9 males) age range between (19 -78). Clinical examination and a bilateral lower limb venous duplex scan were initially performed to ensure a normal venous system. Study protocols were approved by the National Research Ethics Service – London. All participants gave written informed consent. One leg per volunteer was examined (determined randomly) and then prepared as per the manufacturer’s instructions. This entailed using a small abrasive pad and alcohol wipe included in the geko™ pouch to prepare the skin on the lateral aspect of the knee. After applying the device essentially over the head of the fibula and wrapping the “tail” end around the posterior aspect of the knee the volunteer was placed in a sitting position and left for 5 minutes to establish venous and arterial equilibrium, thereby reflecting more accurately the individual’s true unaffected baseline venous flow. The intensity of the stimulus was dictated by each participant’s ability to comfortably tolerate the effect. Blood velocity and volume flows were measured in all three calf veins at rest before any stimulus was applied and during stimulation. The peroneal, posterior tibial and gastrocnemius veins were all imaged in a longitudinal section using the IU22 ultrasonic scanner (Philips Medical, Seattle, WA) and a broad bandwidth L9-5 linear array transducer. Measurements were taken mid-calf for the posterior tibial and peroneal veins, whilst the gastrocnemius veins were measured just distal to the confluence with the popliteal vein. Subsequently, peak velocity (PV) (cm/sec), diameter of the vein at the point of sampling and the duration of the Doppler spectral waveform produced by the calf muscle contraction were measured. Knowing that resting venous blood flow in a subject can change over time5 and patterns of flow will change according to breathing and the cardiac cycle6 strict protocols were observed with the ultrasound measurements being repeated 3 times on each calf vein examined and the mean value taken.
RESULTS: 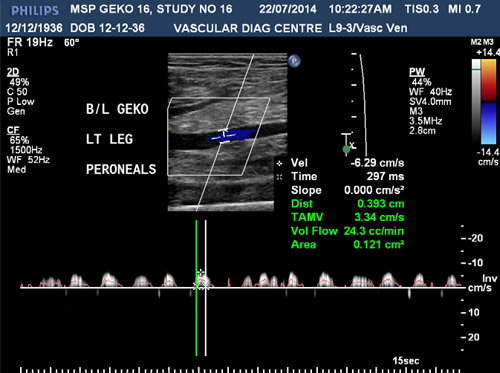 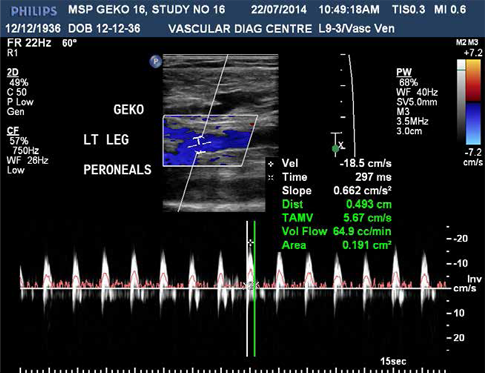 Fig 2; With use of the geko™ device

Venous flow in all calf veins significantly increased during neuromuscular stimulation from the geko™ device as shown above in the peroneal veins.

RESULTS (cont):
The effect of the neuromuscular electrostimulation on PV and volume flow within the 3 calf veins studied are shown below. 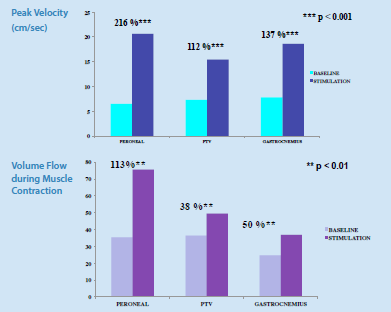 The above graphs illustrate the greatest increases in peak velocity and volume flows occurred in the peroneal veins followed by the gastrocnemius veins and finally the PTV.

CONCLUSIONS:
This is the first time that neuromuscular electrostimulation (NMES) is an effective method of increasing flow in the axial deep veins of the calf. Significant increases in velocity and volume flow in response to the electrical stimulus were seen in all three veins studied. Enhancements of both blood velocity and volume flow are key factors in the prevention of venous stasis and ultimately deep vein thrombosis (DVT). Further studies are justified to determine the efficacy of the device in the prevention of DVT. 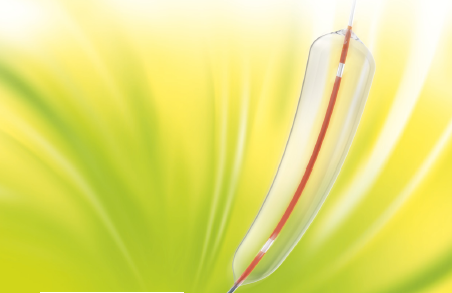 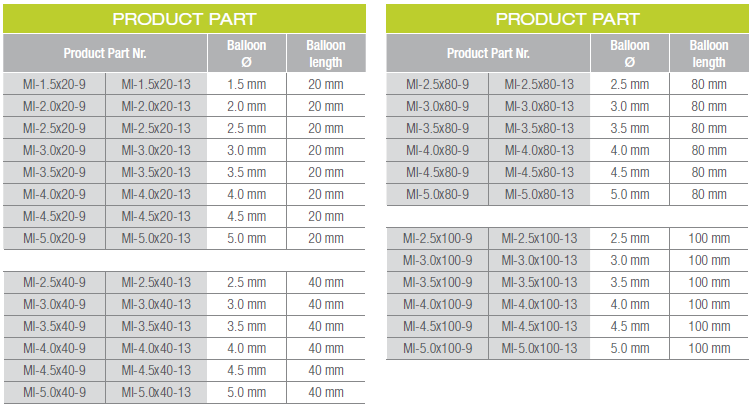 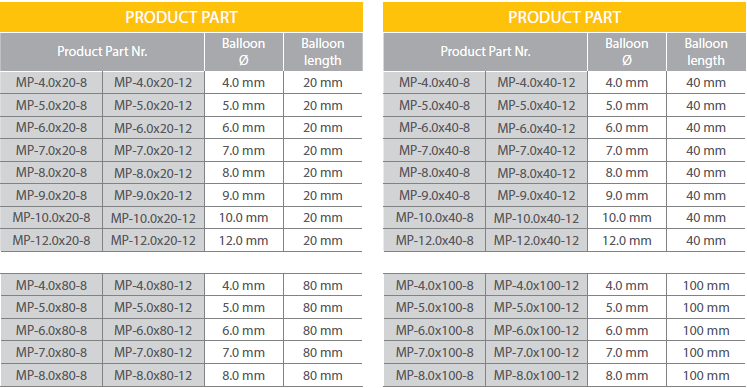 An angiographic or diagnostic catheter is intended for use in angiographic procedures. It delivers radiopaque media and therapeutic agents to selected sites in the vascular system. It is also used to lead a guidewire or a catheter to the target site.

Catheter Directed Thrombolysis is a percutaneous procedure used to dissolve blood clots (thrombus) by administering a lytic directly into the clot through a catheter. 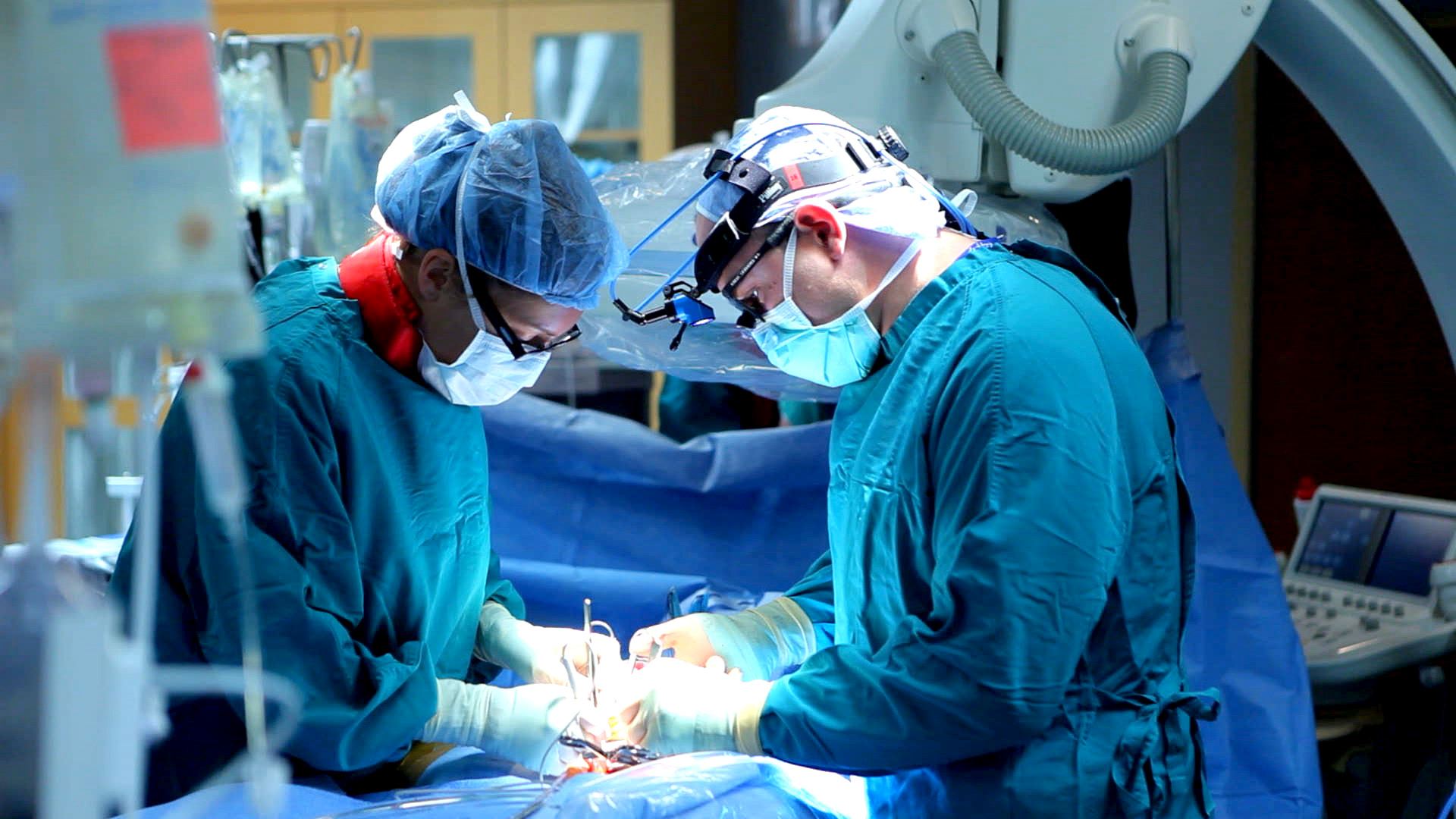